While Fearless Presentations ® groups on average are 8 or 9 people, (sometimes larger, sometimes smaller) our Boston public speaking Class, held on August 25th and 26th, was smaller than the usual with just a few participants! This meant that the trainer, Eric Molin, had a unique chance to really work closely with the participants making it more like a presentation skills personal coaching than a group lesson. 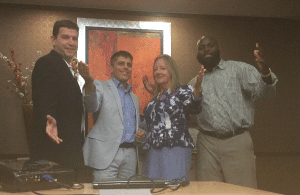 The class members discovered that just because we present to a difficult, skeptical, and often hostile audience does not mean it must be difficult for us, and that even a difficult presentation can still be given fearlessly. One participant was a seasoned negotiator who presented regularly to attorneys, insurance adjusters, and accident victims. Another participant was a consultant working for the State of Alaska who presented to local/state government regarding social issues in the workplace and what the costs (obvious as well as hidden) are to not dealing with workplace problems such as bullying.

The class discovered that with the Fearless Presentations ® method their confidence and persuasiveness grew, their nervousness decreased, and that despite the formality of the setting and audience, they could use personal stories to win over their audience and get the action they needed. In 2 days the participants improved their body language, persuasiveness, and confidence and both of them felt that the course was a worthwhile investment which would bring them more success in their respective jobs.

Eric Molin is a speaking coach based in Vienna, Austria. He has own his own public speaking training company serving Germany, Austria, and Switzerland for the past seven years, and he also teaches public speaking and team building programs for The Leader's Institute® in the European Union as well.