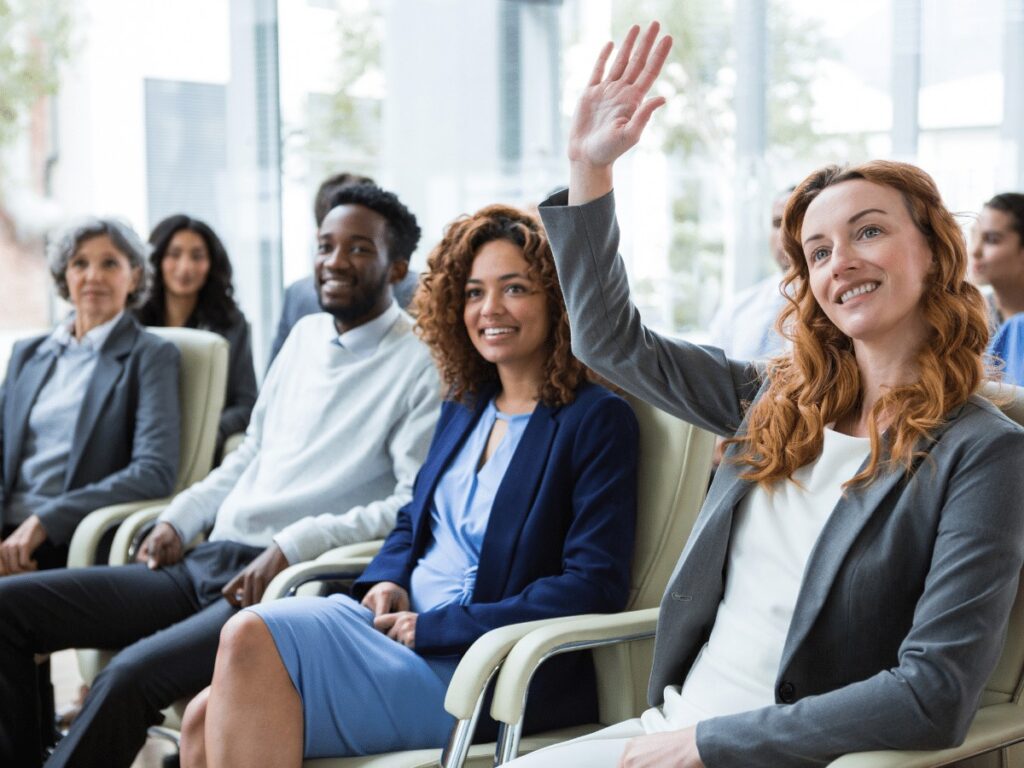 Audience Participation is one of the most effective ways to make a good presentation into a stellar presentation. However, it also has a lot of danger. A good, thought-provoking, open-ended question to the audience can help you persuade even the toughest audience. However, if the audience believes that your question is being used to manipulate them they may respond negatively or shut down entirely.

Also, we are not talking about a question/answer session like some speakers use at the conclusion of a presentation. These ideas are ones that you can use to help you explain your content during the presentation. When you become a master of these skills, you will be seen as a more professional speaker and presenter!

Good Ways to Get Your Audience Involved in the Presentation

The absolute best way that I have ever found to use audience participation questions is to turn your bullet point into an opinion asking question. Basically, you ask the audience to explain your bullet point. This technique is really simple if you have a well developed bullet point that includes a result that your audience wants. Here is an example…

Standard Bullet that Most People Would Use.

However, this bullet has no result built into it. So, as the presenter, I can just ask myself, “If someone does this action, how will he or she benefit from it?” The answer to that is that the person will become a more concise speaker. So, I just add that to the bullet point.

At this point, an open-ended question is easy. I just add the words “In what ways would…” to the front of the statement to make it into a question.

In what ways would limiting your presentation to five main bullets help you design a more concise presentation?

The “Think, Write, Share” activity is a fantastic way to get your group to give feedback to you. Before I explain the technique, let’s discuss why it is valuable. Quite often, especially in training sessions, we really want to ensure that the audience understands what we have delivered. We also want to make sure that the audience retains the information. So, many new speakers will just ask the audience a question about the content. Of course, audience members will often be self-conscious about speaking to the group about content that is still fairly new. As a result, the feedback will be minimal.

A better technique is what we call, “Think, Write, Share.” Have the audience think about the question that you ask. After a few seconds, have them write down possible answers. After the group has written quite a bit of content, only then do you ask them to share the content.

For instance, I often start my presentation classes with a question like, “Think about all of the different physical things that happen to a person’s body when he or she gets nervous speaking. (Pause for a couple of seconds.) After you have thought of a few of these things, write down two or three that occur most often. (Wait for everyone to have at least one item written down.) What were some of the things that you wrote down?”

The beauty of this technique is that we aren’t putting anyone on the spot. If the person wrote something down, then he or she will not likely be uncomfortable reading the thing that they wrote to the group. It is an easy way to get the entire group to participate.

A variation of Think-Write-Share is Group Discussion and Report. You basically just divide your audience into small groups of five to six people. You can either give each group a different question or have all of the groups ponder the same question. Then, give them a couple of minutes to discuss their question as a group and come to a consensus. Finally, have one member of the group give a report of their findings.

I often use this technique in classes after I assign an activity where groups will be working independently for some time. For instance, in my leadership classes, we have an activity on group problem solving where each group will be practicing the skill independently of each other. As a result, the groups may finish at slightly different times. So, I’ll have the first group begin to discuss summary questions as a team. As each other team completes the activity, I’ll give them the same questions. Once all of the teams are finished with the original activity, I have all of the groups report on the answer to the question. That way, no group is sitting around doing nothing.

Once You Ask the Question, Wait for an Answer.

When we ask a question of the audience, we often slip into a strange, Star Trek-like, space-time continuum where time slows down. It is easy for a presenter to ask a question, and then right away, answer the question ourselves. It seems like we have been waiting for a long, long time, but in fact, it has only been a slit-second. Quite often, when we ask a question of the audience, the participants want to think about their answers a little. So, it will sometimes take a little longer to get the responses. Don’t worry. If you asked a good question, they will respond.

If You Get No Responses, Re-Ask the Question a Different Way.

If you get answers different than you were expecting or don’t get any answers at all, take responsibility for the mistake. Something like, “Let me re-ask that question. I don’t think that came out right,” is a good way to get the audience focused on the new question.

Give The Audience Atta-Boys.

One of the most important secrets to getting great participation is to positively reinforce the action that you want to encourage. So, when you ask a question of the audience, you want to do two specific things.

Other Types of Audience Participation that You Should Use Cautiously

These are questions that we ask that have an obvious answer. In fact, in most cases, we don’t really expect the audience to answer. I have to admit, when I was being trained as a speaker, my mentor told me to, “Never ask a question of your audience unless you really want them to answer.” The reason for this advice is that rhetorical questions have a high propensity to be seen as being manipulative. Obviously, if your audience feels like you are trying to manipulate them, they will react negatively.

However, audiences trust speakers who they can relate to. They trust speakers who are like them. So, if you begin your presentation with a statement that everyone in the audience will agree with, it can sometimes build that rapport. For instance, I might start a presentation class with a statement like, “Would you agree that most people have at least some type of public speaking fear?” Another option might be, “Would you agree with me that most business presentations are pretty boring? So if you are just a little more interesting than the last person who spoke, your audience will think you were great, right?”

Yes/No or Show of Hands Question

Personally, these types of questions are not my favorite. I tend to not use these a lot, myself. However, they do have a certain use. This is a great way to call attention to a group that you want to set apart as elite. For instance, if you have the top salespeople stand at the sales convention, you make the ones that had to remain sitting think, “I want to stand up next year!”

One of my friends leads big 300+ person seminars where he charges a nominal fee for attendees to come to the seminar. However, he has a smaller group of attendees who participate in his one-on-one ad group coaching sessions, and they pay an extra fee for this service. Anytime he has new openings in this coaching group, he will recognize the group at one of his big meetings. He will just say something like, “Can I have all of my Platinum Group please stand?” Then as they are standing, he will say something like, “If you have questions about any of the content that I’m covering, make sure and ask one of these folks.”

Basically, by separating out the coaching group, he has generated interest from the audience. Quite often, he will have participants coming to his registration table asking about how to join the group before he has even started to promote it. So, later in the meeting when he hands out the application to the entire audience, he gets more applications returned.

A Contest or Game

If you want to reinforce content that you have shared earlier in your presentation, sometimes a game or contest can add some fun. There is a company called Game Show Presenter that creates software for instances like this.

Back when I used to do a lot of sales training, I used to use this technique a lot. Salespeople are really competitive. (They also don’t pay attention to training much, LOL.) So, if I had a two-day sales course, I might end the first day with a Jeopardy-style game show. I’d divide the class into a few teams, and the winning team might win gift cards. Obviously, this isn’t going to be the best way to end all meetings, but in certain situations, it works really well.

By the way, we have a number of laptops pre-loaded with game show activities. If you send us your questions, for a small fee, you can rent our software for this type of activity. (https://www.leadersinstitute.com/team-building/who-wants-to-feud).

Use Audience Participation in Your Presentations to Make them Interactive

Regardless of which type of activity you choose, add in some type of audience interaction. It will make your speeches much more fun and interesting!