As we approach the 100th podcast episode, I'm amazed at how my company and training program have changed. I'm shocked at how important continuous improvement methodologies have been to this process. By the way, if you are looking for a long series of academic continuous improvement methodologies, this isn't it. However, if you can see what happened to me, The Leader's Institute ®, and Fearless Presentations ® over the last year, I hope you can gather some great tips to improve your success!

Continuous Improvement Methodologies in the First Years of Fearless Presentations ®

When I started The Leader's Institute ®, I had been working for a huge training company for almost a decade. The company had over 1000 instructors worldwide. In my second year with the company, they instituted an update to the curriculum. Because there were over 1000 instructors, it took over four years to fully institute this update. The big problem was that in the 1990s, huge technology innovations were occurring. By the time we completed the update, the content was already outdated.

My customers were telling me that they wanted coaching on PowerPoint Presentations and teleconferences. 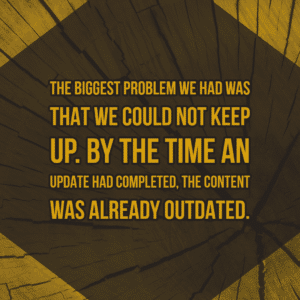 They were also looking for shorter, more concentrated seminars. In many cases, they would bring their teams together for a few days at a time. So they needed 1/2 day, 1-day, or 2-day classes to fit the bill. The company I was working for was slow to adapt to the changes in the marketplace.

So, I quit, and I started The Leader's Institute ®. In those first three years, I instituted a series of continuous improvement methodologies for fast change. My methodologies were really simple. I would go out and teach a class. During the class, I looked at what was working and what needed to be improved. Next, I looked at all of the surveys from the participants and made corrections when needed. So, my 20th class was totally different from the very first one that I taught. I looked at each class. The stuff that worked well, I kept. The stuff that didn't, I cut.

More Formal Continuous Improvement Was Added as the Company Grew

The informal continuous improvement methodologies worked well in the beginning. (I was the only instructor.) When I started teaching other instructors how to deliver Fearless Presentations ®, though, it got harder. Interestingly, the positives changes came about much, much faster, though. Just so you know, we didn't implement this process on purpose. It did it out of necessity. 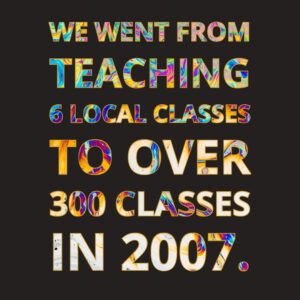 In those first years, I improved the process continues to stay new and fresh in the market. When I started training new instructors, I was still doing this.

These new instructors just saw what I was doing, and did it themselves. We started implementing a weekly conference call with all of our instructors. Each week, I'd challenge the team to teach one new thing that they had learned. The speed of change increased so quickly during those years. The company grew 200% to 300% each of these years.

We went from teaching six local classes in Dallas/Ft Worth in 2000 to teaching over 300 classes in 2007. The continuous improvement methodology we used was still simple. We just looked for ways to improve communication among the team. When these instructors shared new ideas, we tested them. The ones that worked, we implemented. The ones that didn't, we flushed.

In those early years, I only brought on new instructors when I was so busy that I couldn't handle the work. So, many of us were teaching three to five days every single week. At my previous company, I taught about 14 hours per month. Most of my instructors in the early years were teaching over 100 hours every month. I used to joke that some of my early instructors had more experience in three years than most instructors get in a lifetime. 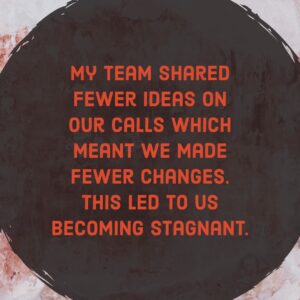 After five years of this, though, our program was so much more advanced than our competitors, that we got cocky. We were doing the same old conference calls each week, but new ideas were few and far be

tween. My team shared fewer ideas on these calls. We implemented fewer changes. As a result, stagnation set in.

By the way, this was right at the start of the YouTube generation. Also, webinars and online courses became more popular. In the next three years, business plummeted. A few of my best instructors left the company to do their own things. Their companies were growing, but mine was shrinking.

In less than a decade, I moved from being the trendsetter in the industry to the dinosaur.

Because We Stopped Growing, We Had to Start Over

When I played football, we used to have to push "the sled" in practice. For those of you unfamiliar with this process, you line up five players side-by-side in front of a padded sled. 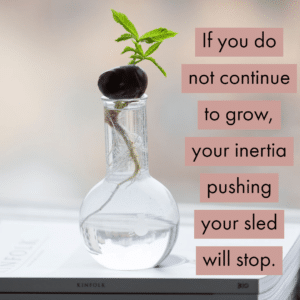 The players, simultaneously, push the sled across the grass. The sled is heavy, though. Often, one or more coaches would jump onto the sled for added weight. The key to the process is getting the entire group to hit the sled at the same time to start it moving. Once the sled is moving, it isn't that hard to keep it moving. Getting it started, though, is tough.

If you don't continue to grow (as a person or company), your inertia pushing your sled will stop. That is what happened to us. I pushed and pushed the five-person sled with all my might... alone. It took a lot of effort to get started. However, once I added a second person, the weight of the sled dropped significantly. when the third person came along, I and the other guy were ecstatic. Once we got to five people, we were all still churning away, but the process was much easier. Finally, we started adding in more team members so that we could get a little rest every now and then.

The Sled Analogy Works Both Ways

In the analogy above, once we had a team using our continuous improvement methodologies, the sled was moving. We had so many team members focusing on growth, that no single person had to push too long. (...Or too hard.) It felt like we were pushing the sled downhill. However, once we stopped focusing on that continuous growth, fewer people were pushing the sled. (To be brutally frank, I was likely one of the first people to stop pushing. I was just cheering the pushers on from the sideline.)

When the recession hit in 2008, that downhill trajectory that we had been on changed. We were now going uphill. Eventually, there were so few people pushing the sled, that all the momentum stopped. The sled started moving backward, and we were working twice as hard as before just to keep from getting run over. We spent three years working our butts off to catch up and start to grow again. It would have been easier to just start over.

All companies will get to a point in their cycle like this. By the way, all individuals will as well. Momentum is much easier when you are working with it than against it.

If You Are Constantly Growing, Momentum Will Push You to Success

We learned a valuable lesson. Since that momentum challenge, we have started each year with a process that totally revolutionizes things. A year and a half ago, we added the podcast. I can't tell you how just going through the process of creating new content for the podcast each week has helped keep our sled moving. I think that I have learned more about presentation skills in the last two years than I did in the previous 20. These are a few of the things that have happened because of these continuous improvement methodologies. 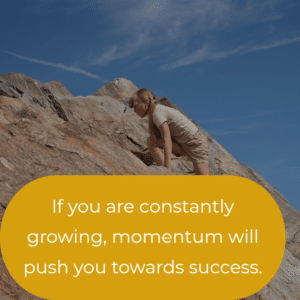 In January of this year, we updated the content of our two-day class pretty dramatically. In the middle of the afternoon session of the first test class, I looked around the room. Each of the people in the class had one of those moments where surprised caused their mouths to gap open. As a result of the concept from the podcast, we totally revolutionized the way presentations are designed. In the first 30 or so classes using this structure, we have received so many positive comments about how awesome this process is.

We have, pretty much, doubled the number of classes that we are teaching in the last year.

The fun part about this is, "You ain't seen 'nothin' yet!"

We Will be Revealing a Fantastic Process in the Next Month!

In the next month, I will be revealing one of the most revolutionary things to come to business presentations since PowerPoint. We are still putting all of the details in place, but I can give you a preview here. The best way to reduce nervousness from public speaking is to create a series of successes in front of a group. We have always believed that a class is the best way to do that. Each class member gets one-on-one coaching, but they also get practice speaking in front of a group.

The biggest problem with this process, though is that after the class, unless you start speaking right away, you can backslide over time. This new process, that we will unveil in the next few weeks, fixes this challenge!