Short anecdotes for speeches are a fantastic way to end a presentation with a bang. These stories can be fiction, actual incidents from history, or even just funny stories from your own personal life. When you deliver them well, though, they have a lasting impact. I often use these short anecdotes for speeches when I’m trying to teach something meaningful to the audience. So, in most instances, speakers use these anecdotes in training sessions or motivational speeches.

When You Use an Anecdote in a Speech, Tie the Story to the Greater Meaning of Your Presentation.

The anecdotes themselves add entertainment and humor to a speech. But when you use the story to relay a greater message, they almost have a magic quality. When you tell an anecdote in a speech, spend time at the end tying the incident back to the main point of your presentation.

When my daughter graduated from High School, a local pastor delivered her commencement address. He used a well-known anecdote in a masterful way as the start of the commencement speech. Since he was a pastor, he told the story of John the Baptist baptizing Jesus. Being a professional speaker myself, I wondered exactly how he would tie that story to a graduation ceremony.

He went on to explain how many Christians might see a “Baptism” as the ending point. However, Jesus started his public ministry at his baptism. The pastor then shared with the graduating class that many of them are likely seeing the ceremony as the end of their schooling. In reality, though, commencement means the beginning. The speaker used the anecdote really well and inspired the graduating class with the short story.

So, I thought that it might be fun to just jot down a few of the most inspirational (or just funny) short anecdotes for speeches that I have come across in my career. Perhaps you can use them in your next presentation.

The Parable of the Pebbles 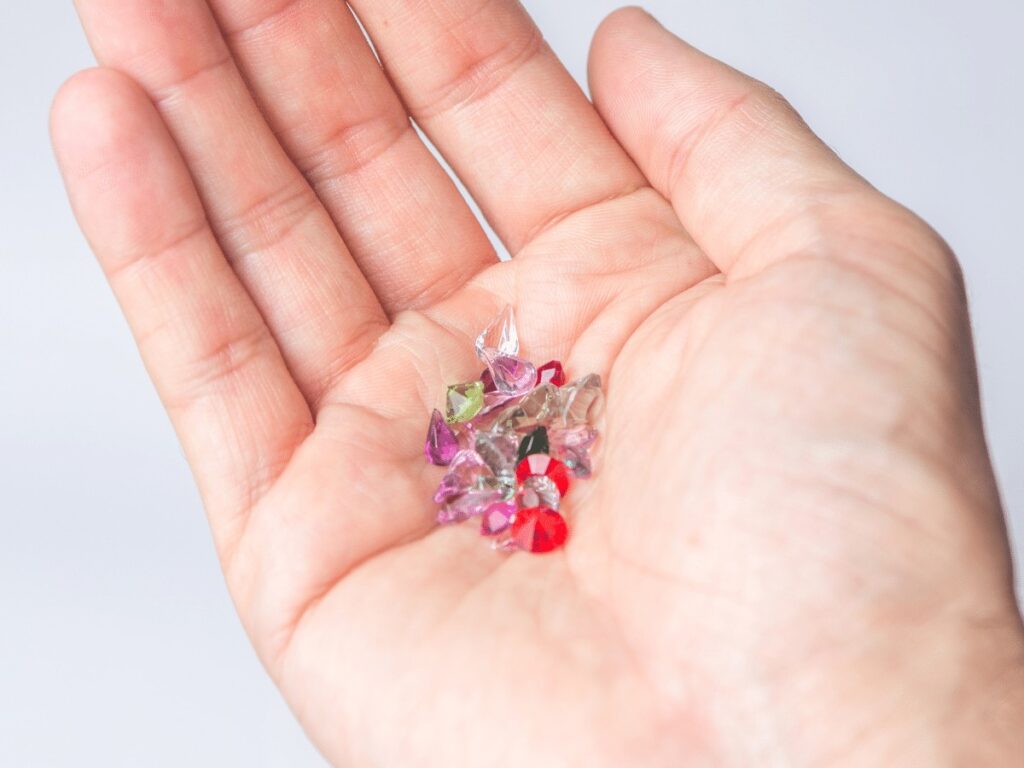 A merchant from Alexandria had a trade route across the desert. He traveled from village to village selling goods off the back of his camel. On one trip, a sandstorm kicked up and covered the trail. He wandered around looking for the familiar route. When he ran out of water, he began to worry.

Eventually, he saw in the distance what looked like an oasis. He moved as fast as he could to what could be his salvation. Just as darkness fell, he felt cool water on his sandal.

He dropped to his knees and began cupping water into his mouth with his palm thanking God that he had survived. Then, out of the darkness, he heard a big booming voice from heaven say, “Merchant! Reach down, pick up some stones, put them into your pocket, and in the morning you will be both glad and sad.”

Well, when a big booming voice from heaven tells you to do something, you tend to do it. So, he reached into the stream, picked up a few pebbles, and put them into his pocket. He then packed up his camel as fast as he could and took off.

When he felt like he was far enough away from the voice that he was safe, he made camp.

Laying under the stars, he finally realized that he had been pretty dehydrated. So, he convinced himself that he had just imagined the voice. When he woke the next morning, he felt something in his trouser pocket. He pulled the pebbles out of his pocket in amazement. They weren’t just ordinary pebbles. They were precious gems — diamonds, emeralds, sapphires, rubies… At that moment, he was both glad and sad.

He was glad that he picked a few pebbles up…

He was also very sad, though, that he hadn’t picked up more while he was there.

The parable of the pebbles is an analogy to training sessions. When we finish a training session without putting a lot of effort into the skill development, we will often be glad that we gained some skill. However, we can often look back and wish that we had worked a little harder so that we could have developed more. 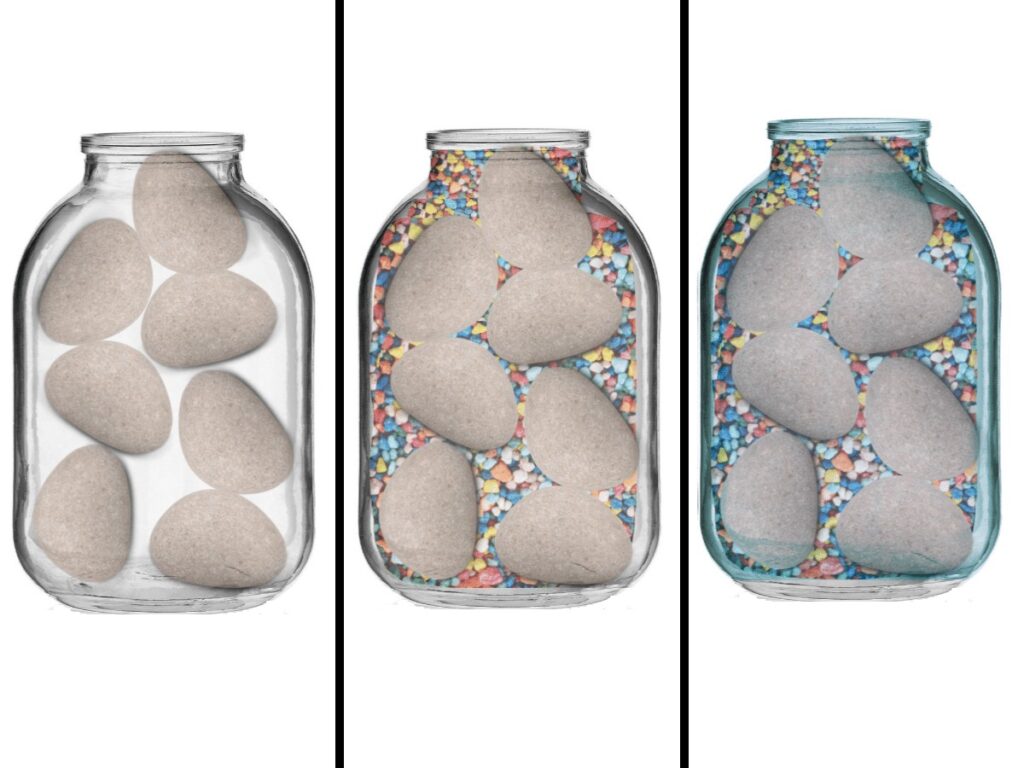 A team of high-achieving executives hired a consultant to help them develop more work-life balance. He brought in a one-gallon glass jar and filled it with large stones. He asked the group if the jar was full. The group agreed that the jar was pretty full.

However, he pulled out a bag of smaller pebbles like you would see in a fish tank, and poured them in as well. As he shook the jar, the smaller pebbles fell into the spaces between the large rocks. Again he asked, “So, is the jar full?” The group was more hesitant, now, though. So, they waited to see what he would pull out next.

Not to disappoint, he pulled out a bag of sand and poured it into the jar as well. “Now is the jar full?”

One of the high-achievers in the front row, learning his game said, “No, you can still pour water into the jar.”

Of course, he did.

The same woman in the front row then said, “I get it. The point is that no matter how busy our schedule is, you can always cram something else in, right?”

The consultant smiled at her and said, “Not exactly. My point is that the big items only fit into the jar at all because we put them in first. If you don’t focus on the big things like, spending time with your family and having a strong spiritual life, the little things will always seep in and take up all the space.”

Use the Rocks in a Jar Time Management parable to encourage people to focus on the most important things in life.

The Obstacle in Our Path Parable 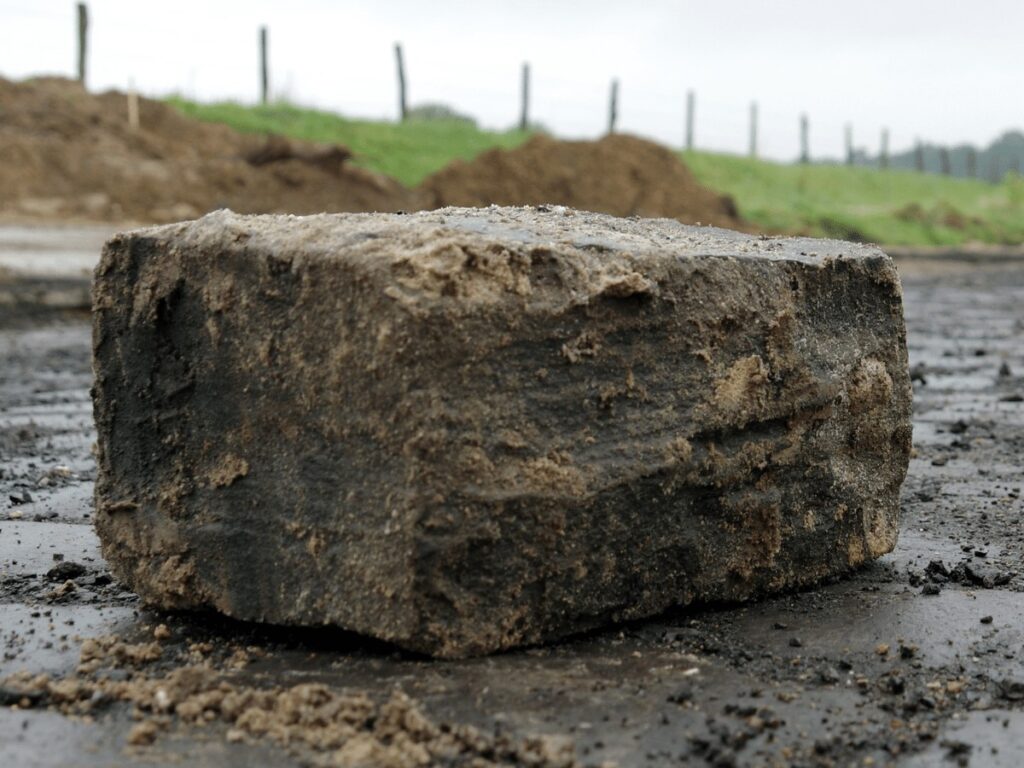 A wise king had a boulder placed in the middle of the main road leading into and out of the kingdom. For most of the day, busy merchants and wealthy nobles, although greatly irritated, just made their way around the obstacle. Many of them cursed the king for not having the boulder moved.

Finally, a vegetable farmer with a small cart came by. Seeing that the boulder was a great obstacle for his fellow merchants with wagons, he decided to try to move the bolder. He pushed and strained as fellow travelers watched. Eventually, he was able to clear the boulder from the roadway. As he went back to retrieve his cart, he noticed a money bag where the boulder had been. Inside was a dozen gold coins along with a note from the king thanking him.

You can use the Obstacle in Our Path Parable to show how every obstacle in our path is an opportunity for reward. However, most people see the obstacle and go the other way. 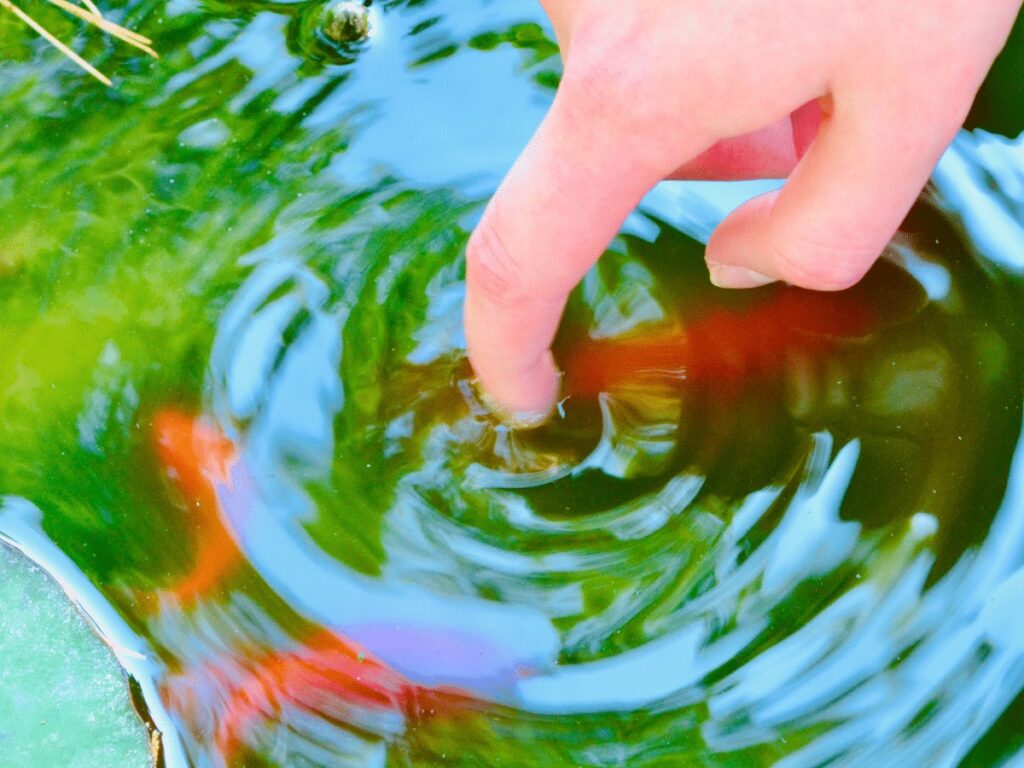 Have you ever wondered, “What is the ripple effect?” Most likely, the common phrase in economics and other industries came from this parable. The ripple effect basically just means that there are often unintended consequences of any action. You can use this short anecdote for speeches to teach this concept.

A troubled monk goes to his Abbott for guidance, and after listening intently, the Abbott asks the monk to join him on a walk. The arrive at a pond near the back of the monastery. The Abbott asks the monk to pick up a stone and toss it into the center of the pond. The monk complies. “Now,” said the Abbott, “as the ripples come closer to the shore, stick your finger in the water to try to stop them.” The monk tries, but as he sticks his finger in the water, the action just creates more ripples.

The confused monk looks at his mentor and says, “Abbott, I can’t. My actions just cause more ripples.”

The Abbott smiles, and says, “So, you cannot stop the ripples?”

“But could you have stopped yourself from tossing the stone into the pond in the first place”?”

This short anecdote has a ton of applications in a speech. I sometimes use it to show that often we spend a lot of time trying to mitigate a symptom versus fixing the actual problem causing the symptom. For instance, people will often come to my classes to reduce the number of times they say “uhhmm” in a speech or to avoid speaking too quickly. Those are just symptoms of nervousness, though. If you try to treat the symptom, it’s like trying to stop the ripples. However, if we help the presenter reduce the actual nervousness, the ripples go away altogether.

Tell Us Some of Your Favorite Short Parables for Presentations.

If you have a compelling story, anecdote, or parable that you like t0 use in your presentations, share it with us in the comments below. We will try to make this page a repository for great presentation anecdotes.

← How Many PowerPoint Slides Should You Use in a Presentation? The Greatest Speeches in American History from Revolution to Leaders of the Free World →