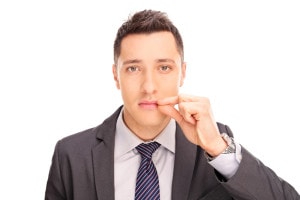 In the business world, we’ve heard hundreds of speeches. Some, like Martin Luther King Jr.’s legendary speech, stick in our minds from our school days. Others, we simply endure and sit through, because we have no choice. Chances are you’ve been asked to give a speech at one time or another. You know you’ve got the expertise, plenty of material, and the evidence to back that up. But how do you make it one of those speeches that resonate with your audience, and not one that has them checking their emails and missed messages five minutes in? It takes skill to deliver a good speech. Your material is the real meat of it, of course, but the way you deliver it – that is, your word and phrase choices, your attitude, your mannerisms – are what gives your speech that extra flair.

Back to the word choices – there are some phrases you should never use in your speech, because they just turn people off, or they’re clichéd, or for whatever reason, they annoy people.

1. “Turn Off Your Laptops and Gadgets”

Yes, you want people to turn their phones and laptops off. Yes, you want them to listen to you. But lecturing at them, even before you begin to speak, is not the way to go. They’re adults, and should have manners enough to do so. If you’re adamant that this message is needed, get the person who is introducing you to make a note off the top. Don’t be the ‘bad guy.’

It’s tacky. The sound check guy should have taken care of this ahead of time, and chances are, you aren’t the first person speaking at the event. Some people use this to segue into their speech, but it’s a very weak introduction point. Don’t say it!

3. “My Speech is Short” or “This will Only Take a Few Minutes”

Telling the audience that you’re going to keep your speech short isn’t necessary. This phrase is meant to entice people to listen to you because you won’t be up on the stage long, but the problem is, you’re undermining yourself.

You’re making it look like you don’t deserve the audience’s time, and that they are doing you a favor by listening. Don’t be so humble – you deserve to be up there, and your message is important.

Again, you’re implying that your message isn’t worth listening to, or worth writing down. Let the audience write down your words of wisdom. Unless you’re a college professor handing out a summary after the class, your words are gold, and worth remembering, because you won’t be repeating them after. Even if there are handouts to be distributed after the classes, chances are these handouts won’t be a transcript of the speech, so just let people take notes as they see fit.

Okay, you might be a bit nervous. But there’s no need to admit that! It will undermine your credibility. This little line, even if it’s meant to endear you to the crowd or to make you seem more accessible and down-to-earth, is weak, and your audience won’t appreciate you for it. They may not take you seriously as soon as those words come out of your mouth.

You might be the star of the show, but the customer is always right. In this case, your audience is the customer. Don’t belittle them for having missed the point, or for not listening, especially if it’s during a Q&A session. The person asking could have a good excuse – being unable to hear or having had to run to the washroom. With a smile, repeat yourself quickly. The rest of the audience will know that you are being kind.

Never Rush through Your Notes

Let’s say you’ve run out of time. Don’t point this out – it just shows your lack of preparation and planning on your part. Quickly and gracefully sum up your speech or wrap it up as quickly as you can, and don’t stress. The audience can sense it when you’re rushing or in a panic.

Remain calm, and tell them to let you know if they have any further questions.
These little key phrases to avoid show your own weaknesses, which audience’s won’t even clue into until you wouldn’t point them out. Following these rules will make your speech run smoother and make you look better prepared.