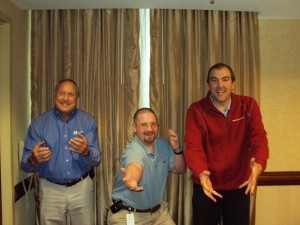 Boston, MA was the site for a small but successful Fearless Presentations workshop. There were only four people attending, but the class was very good and received very positive feedback. In fact, 2 of the three companies represented mentioned they would recommend to their supervisors that class become one of their regular training modules. We'll follow up on that and see what happens.

All four men were experienced in presentations and already had some basic skills. some were looking at situations where they would be doing more speaking and wanted to hone their presentations skills, others were taking the class because they are expected to take continuing education classes at regular intervals, and another reason was it just looked like a good class. We had fun going through the material and there was good input from all of the class participants.
After the first session, a couple of the people agreed that they had already gotten their money's worth. Of course, fear is public speaking is a clear and present concern for most people. So in addressing how to overcome that fear, much was shared that helped the individuals for their first purpose in coming. So when we discussed that 90% of their nervousness doesn't show up to their audience, they were relieved. When we reviewed the videos, all were certain and expressed that they were more nervous than the videos revealed. This just reinforced the point, they were nervous, but the audience was not aware of it. Just that fact allowed them, the next time they got up, to take a couple of deep breaths and address the audience with confidence knowing that their nervousness didn't show- so it was easier to display confidence in their message.
It was a great two days and Boston, although rainy the whole time, was a great experience. If you're in the Boston area or would like to spend some time there, check out the next Fearless Presentations in Boston.