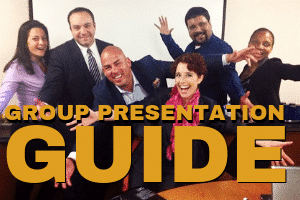 I spent years (the better part of a decade) studying everything I could about presentation skills and how to deliver powerful speeches. Years later, I became a presentation coach. I had been coaching speakers for a few years before I got an interesting call from a prospective client. "We have a group of five presenters who are competing for a $300 million project. This contract is vital to the growth of our company. Can you make sure they are delivering a the best possible group presentation for us?" That single request started me down a road that has been a fantastic accomplishment for hundreds of presentation teams over the last couple of decades. Just as an FYI, the group that I coached in that first session didn't get the big contract. However, from that experience, we learned and adapted. Over the next three years, the group closed over 80% of the contracts that they competed for. Whether you are presenting group sales presentations, or you are presenting a group presentation in school, the following tips can be very helpful.

In this group presentation guide, I will share with you some of the alterations and best practices that we found.

Make All the Content in Your Group Presentation about the Audience--Not Your Team.

The first (and biggest) mistake that most group presentation teams commit is starting by talking about themselves. The first time I coached a group, I looked at their slideshow and saw...

Big mistake. But, Doug, you don't understand... Our potential clients need to know that the team is skilled and has the experience to do the job. Well, that is half true. Yes, the audience wants to know that you are qualified. However, the audience has problems, and they are looking for someone to help them solve those problems. They don't really care abut you or your team nearly as much as they care about solving their problems. So, make the content of your presentation about the problems that they have.

I'll give you an example. A few years ago, I was working with a construction company who was competing to remodel a high school for a city school district. As we began to create the presentation, I asked the group what challenges or problems did the school board have that their company would be able to lessen or mitigate. The first answer that i got was, "Since this is a school district, the major concern is price." Not being from the industry, I was a little shocked. Why would price be the one and only concern that a school district would have about a new high school? Their answer was, "It's the government." I asked my question more specifically. "Other than your workers, who is going to be around the construction site every day of the school year?" Of course, they answered, "students and teachers." When they answered the question, clarity came over the group. They realized for the first time that a major concern that the school board would have would be the safety of the kids during construction. The next question that I asked was, "What do we know about the school year?" The first answer was, "Summer break." I replied with, "So if you presented the board with a plan to get most, if not all, of the construction done during the summer break, would that help the school board solve a big problem?" The answers were obvious once we started thinking like the members of the audience.

So, we designed a presentation with bullet point number one being about how if the school board hired my clients, they would have a completely remodeled high school bu September 1st. Bullet point number two was about how their team would make sure that no student or teacher would be inconvenienced or placed in danger during the construction. The third bullet was about how they would control costs so that the project stayed in budget. Then, they proved that they could do this by using examples (of their experience) for each of those points. They used a couple of examples of how they had remodeled similar schools and completed the projects by the fall school start date. They used examples of situations of past projects where they mitigated danger on the job site. And they also used a couple of examples of situations where they were able to make adjustments, post-contract, that help school districts stay well under budget on the projects. So, in reality, the were able to share a lot of examples from their experience, but they delivered these examples from the context of helping the potential client solver their problems.

Make Sure the Whole Team is Involved in the Creation of the Group Presentation.

The hardest presentation to deliver is one where the boss throws a slideshow at you and says, "Here, deliver this." When a speaker designs his/her own presentation, you have a better chance of the speaker being fluid and poised when he/she speaks. When someone else designs the presentation, though, it is much tougher. It's kind of like letting someone else pack your parachute. Just before you pull that ripcord, you will be very nervous.

I remember in college having to give a group presentation for a grade. My group met a number of times, but three of the five of us did most of the design and preparation. The three of us did okay, but the other two who were less involved did much worse. It was just harder for them because they were trying to catch up with the rest of the group.

Someone has to be in Charge, but the Person in Group Leader Does the Least Talking.

That very first time that I coached a group of presenters, the vice president of the company was in charge. He did almost all of the talking. The rest of the team gave short anecdotal pieces of the presentation. By the way, the VP was a great speaker, and he presented the content very well. However, the feedback that we got was that the audience knew that the VP would be in the home office in Houston throughout most of the project. They were way more interested in hearing from the team that they would actually be working with for the next three years.

As a result of that feedback, we change the role of the lead presenter to be more of an emcee than an expert. In the second presentation, the lead presenter introduced the team and summed up the content of the presentation at the end, and that was it. Interestingly, the audience saw him as a better leader in the second presentation, because he had so many skilled experts on his team. (He didn't have to boast. They could see it.)

Only Add Presenters to the Group Who Can Add Value to the Presentation Purpose (End Goal).

One of the biggest learning curves that we had to experience was to not try to force every team member into doing SOMETHING in the presentation. If you recall, I mentioned that we got the feedback early on that the audience wanted to hear from the team. Well, we took that to the extreme, and we started having every team member give part of the presentation. We did this even if that particular team member had nothing to add to the end goal. For instance, the project manager gave a very compelling deliver of the schedule and how the team would adhere to the timeline. Then, because the group hadn't heard from one of the engineers, he gave a presentation on change orders. That wasn't really his area of expertise, but he didn't have a speaking part, so the group gave him that part. It was mediocre at best. It would have been better to just have him there for the Q&A session at the end in case some engineering questions were asked.

My family went on a cruise last year on New Years Eve. It was great, but they had a New Year party where they had the head of every department on the ship get recognition before the distributed the free champagne. It took forever. And, from my perspective, most of the people who were introduced were of no importance to my trip. So, don't insert more presenters than you absolutely need to. Get your audience to the free champagne as fast as you can.

Assign Roles in the Presentation Based on the Expertise of Each Presenter.

Just as in the prior tip, don't try to force presenters to speak about topics outside of their expertise just to give them face-time with the audience. In the movie Inglorious Bastards, after having most of their team killed in a bar shoot-out, the Americans re-group to assign undercover roles. They are going to play Italian movie makers, and they assign the roles based on the amount of Italian that each person knows.

"Since you speak the third best Italian, you'll be the stuntman."

It didn't turn out well for the Bastards either. It won't work for you. assign speaking roles based on the expertise of the people on your team.

Have Each Speaker Introduce the Next Speaker.

We figured this one out by accident and trial and error, but it works wonderfully. If you want to present as a cohesive team, have each speaker introduce the next speaker. A common practice is for the lead presenter to introduce each speaker, but everyone does that. If you want to be a little different, coach your team members to introduce each other. You'll have to plan a short transition sentence, but these are easy to create. For instance, if you delivering a presentation about a new product, at the conclusion of the Director of Marketing's portion of the presentation, she might introduce the next speaker by saying, "...and of course, the implementation of these fantastic marketing ideas with the store managers will be led by our Sales Director..."

Just a short transition from one speaker to the next will work, however, if you really want to create a positive impact, try...

During that introduction, if the prior speaker builds p the credibility of the next speaker, you can double the impact. For instance, we can re-write the last introduction by saying something like...

"...and of course, the implementation of these fantastic marketing ideas with each of the store managers will be a team of experts led by our Sales Director, Joe. Joe has 20 years of experience implementing sales plans just like this. In fact, last year, Joe's team conducted a similar roll-out where they were able to get a brand new item on the shelves of over 100,000 stores in less than 12 months. You are in great hands, please help me welcome Joe."

For Group Presentations, Just Make Sure to Work Together Versus Individually.

Obviously, we are just scratching the surface of the scratch of how to deliver fantastic group presentations. So, if you have a presentation coming up, and you need help organizing and getting your team on the same page, make sure to contact our office. One of our expert presenters can help a great deal! You can also complete the form below, and one of our instructors will contact you.

← 7 Fantastic Tips from Top Motivational Speakers How to Persuade Your Audience in Five Minutes (or Less). →