Feel nervous about speaking in public? Tell a story in your speech (early), and you can reduce public speaking fear dramatically. One of the first public speaking secrets that we share in our public speaking training classes is that stories are your friend. When you tell a story, you reduce presentation jitters and build rapport with your audience. Don't believe me? Watch any professional motivational speaker on YouTube. You will find that their entire speech is composed of a series of individual stories that they link together. In this post, we will cover some of the major benefits of telling stories as well as some tips on how to do it.

Major Benefits of Telling Stories in a Presentation

They say that a picture is worth a thousand words. Well, when you tell a story in your speech, you are presenting a series of pictures. These pictures magically appear in the minds of the audience. This is where true communication occurs. The human mind thinks in pictures. So, when a speaker is able to create an image in the mind of an audience member that is similar to the picture in his/her head, the speaker has communicated effectively. 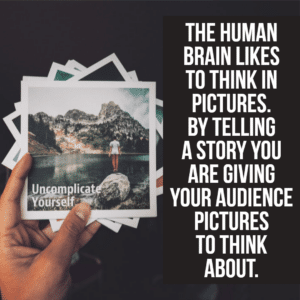 Details in a story are important. However, more words are not necessarily required to generate more details. For instance, I will give you a couple of common first names. These two names should generate an image in your mind similar to the one in my mind. Here goes... Ralph Lauren. Most likely, you immediately saw an image of a Polo rider on a horse. Try this one. Katy Perry. Most likely, you have an image of the singer. Just for fun, let's do one more. Betsy Ross. Most likely, you are seeing the US flag with the 13 stars in a circle. The point is that the descriptions that we give access a shared bond with the audience member. When you tell a story in your presentation, you strengthen that bond. You can create a series of these connections.

One of the major fears that people have when they deliver a presentation is the fear of losing your train of thought. "What happens if I forget something?" This public speaking fear is typically caused by trying to cover too much content without inserting enough examples or stories. Story telling is incredibly simple. All that you really have to do is remember an incident from your experience. Then replay the video in your head of what happened. Finally, just tell your audience what you are seeing in the video. It is really easy.

I had a class member a few weeks ago who told me, "I'm just not good at telling stories." I was a little confused. I was wondering what on Earth could have happened to this guy to make him think that he wasn't a good story teller. However, I didn't argue with him. I just said, "Just our of curiosity, when you were younger, did you ever have a brush with the law?" He thought for a second. "When I was in school, I got a ticket for public intoxication." I said, "Really? Tell me about it." It took a little coaxing, but in the next three minutes, he had us all laughing with him. He told us about how a error in judgement led to him doing community service for a month. 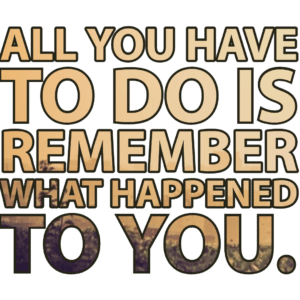 Next, I asked him about the project he was currently working on. "What is the biggest challenge that your team has encountered on the project so far?" He answered. I then just asked him to tell me how they fixed it. He spoke for almost five minutes. When he finished, I just reminded him that each of those examples were interesting stories. In addition, he was able to tell each of those examples to the group without any practice or preparation.

You can too, by the way.

A big bonus, by the way, is that you are reciting a personal experience. Hence, you are the only one who really knows what happened. No one in the audience can challenge you on it. If you deliver a fact, however, human nature makes us want to play "Devil's Advocate." So, by telling a story, we reduce the chance of the audience trying to challenge our data. (For additional details about this, make sure to access the post about How to Persuade an Audience. I go through a series of short presentations using examples to persuade.)

One of the best ways to build rapport with your audience is to tell a story in your speech. It's funny. We are doing a lot more social media at Fearless Presentations ®. One of the things that my social media expert keeps telling me is that people really want to see the behind the scenes stuff that we do. I had a whirlwind travel schedule a couple weeks ago. I had to fly from Dallas to New Jersey. Then from New Jersey, I flew to Las Vegas with a connection in Charlotte. Next, I flew from Las Vegas to Portland via LAX. Finally, I flew home on a red-eye at midnight. 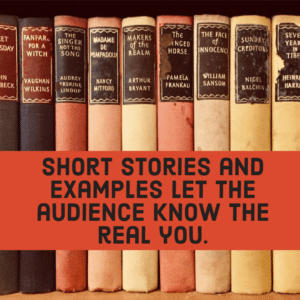 On each leg of the trip, I just posted a Facebook Live about what I was doing. We got more views on those live videos than we have on the last dozen articles and videos that we posted.

What is funny is that concept of what I was doing on social media is what we have been teach in public speaking for years. Those short stories and examples let your audience know the real you. They make the audience care about you. They like you more. Motivational speaker know this. That is why the most sought-after professional speakers are masters of telling stories in their speeches.

How to Tell a Story in Your Speech

In the next post, I will share a few public speaking secrets that will allow you more easily tell a story. In addition, I will show you a way to keep track of great stories. This will allow you to better use them in future presentations!

← Elevator Speech Template: How to Create a 30 Second Commercial for Yourself The 5 Steps of Storytelling - How to Tell a Great Story →