Great speakers know how to tell a great story. This post will give you the five key steps of storytelling that these great speakers know. This is a continuation of the post about how inserting stories into your presentations reduces public speaking fear. In that post, I mentioned a recent class member who told me that he just wasn't good at storytelling. If you feel the same way, than these steps of storytelling can be very helpful for you. Just between you and I, though... Whether you follow these steps exactly or not, just the fact that you are inserting stories into your speeches is a big advantage. Most presenters in the business world give very BORING speeches. A well-placed story makes your message much more interesting and entertaining.

Want to Know How to Tell a Great Story, the Steps of Storytelling Are Not as Important as the Story Itself.

Storytelling in our personal lives is very normal. When we get together with friends or family, we build rapport by sharing stories about ourselves. I went to my High School reunion a few years ago. I was visiting with friends that I haven't seen for decades. What was funny, though, was that I expected that it would be a bunch of old people reminiscing about stories from our teenage years. However, the opposite occurred. It was really interesting to hear about what my friends had done since High School. We spent hours catching up. And the way that we caught up was by telling great stories to each other about our experiences. Many of my friends had accomplished some pretty impressive things. However, none of them sounded like they were bragging.

The biggest public speaking secret that I know is that you can do the exact same thing in your speeches. When you share stories of your successes, your audience lives vicariously through your stories. I remember growing up hearing the phrase, "Experience is the best teacher." After being a business owner for 20 plus years now, I realize how dumb that statement is. Experience is NOT the best teacher. Someone else's experience is the best teacher. When I hear a story about how someone else accomplished a goal that I want to accomplish, I can learn from it. I don't have to experience all the turmoil that he or she went through.

So, follow the steps of storytelling below. However, just realize that the steps, in and of themselves, are not as important as the actual stories. Pick a good story to tell, the steps don't matter.

The 5 Steps of Storytelling

Below are the Five Steps of Storytelling that we have identified in our presentation skills class. These steps will help you organize your stories better. However, the best way to deliver the story in your presentation is to just play the video in your head. Then just tell the audience what you are seeing.

1. Focus on a Single Incident

In the early days of my presentation classes, I stopped using the word "Story" and started using "Incident." The reason was that a novel is a story. However, a novel may contain hundreds or even thousands of incidents. I was listening to a talk radio show recently, and an ad for Legacy Box played. This is an organization that digitizes old photos, films, and videos. The narrator said something interesting, though. He said, "We don't remember days, we remember moments." That is so true.

Great storytellers don't try to tell us a verbal novel. Instead, they focus on a single, interesting incident. The videos above give two dramatically different examples. The first is a tongue-in-cheek example of a person telling a long-winded, rambling story about nothing. The speaker spends eight hours telling about opening a box of sponges. The second is the actor Will Smith telling about learning a lesson as a child. He tells of his father knocking down a brick wall of his story and telling Will and his brother to rebuild it. The story was an entire year of Smith's life. However, he tells the entire year in two minutes. He does this by focusing on specific incidents. He tells about the day his father knocked down the wall. Then, he tells about the day he and his brother laid the last brick.

It makes for a fantastic story.

2. Great Storytellers Get the Audience Involved with a “Hook”

I remember watching the Quentin Tarantino film, Pulp Fiction years ago. In the opening scene, a couple is discussing places to rob. Eventually, they decide to rob the diner they are eating in. As soon as they pull out their weapons, the scene cuts. The two are not seen again until the very end of the movie. I admit, when I watched Pulp Fiction the first time, I was confused. However, when Samuel L. Jackson and John Travolta end up being in that diner, it made me laugh. The Hangover had a similar "start with the end" technique...

Movies, TV shows, and News Programs use this technique a lot. They give you a taste of what is coming at the beginning. You can do the same as one of your steps of storytelling. Foreshadow something that is coming. One of the best examples is The Hangover. The bachelor party group wake up and realize there is a tiger in the bathroom. None can remember how that it got there. The story unfolds to tell us the answer later.

You can do the same thing in your stories. Knowing how to tell a great story starts with a little showmanship. Telling the end of the story first can often be a good hook. To do this, think about the most action-packed part of the story. Then start with that part. Fill in the prequel later.

3. Narrate the Story Using the When, Where, Who, and What

As far as "Steps of Storytelling" goes, this part is most most people are looking for.

However, if you don't focus on steps one and two, then this part will be pretty boring. If you are looking for ways to organize your story better, start with the when, where, and who. Get that part out in the first sentence. The what and the why will be delivered in the rest of the story. In fact, in our classes, we have our students start their stories with "When" the story happened. Here are a few examples...

In each of these, my goal was to both give you the when, who, and where. I also wanted to use the hook to try to get you to want to know what actually happened to get to that point. Now, when I fill in the "What Happened," it should make for a more interesting story.

4. Use Lots of Details. Paint the Picture of Your Story.

Great communication occurs when the speaker is able to paint vivid pictures in the mind of the audience members. 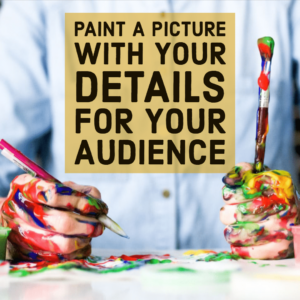 The details that you put into your stories are the key to success. These details also make the content of your speech more memorable.

Our team worked on a similar project last year. We all worked together and came up with a great solution. So, teamwork is important.

This just leave the audience with more questions. Who was on your team? What was the problem? How did they come up with a solution? How did the solution work? How is it similar to what we are going through now? If this story was a painting, it would be some type of nebulous modern art. What we really want is something more tangible.

Last year, Abbie had a client who hired me to deliver a breakout session at their national convention in Tampa. The topic was how to design a persuasive speech. However, since the convention was going to have over 30 different speakers. Many of these presenter were experts in the industry, but not professional speakers. In past conventions, the sessions were somewhat dry and boring. So, the client asked Abbie and I to design a way to train 30 speakers in over a dozen different cities. To come up with a solution, we brought in our video producer, Evan. We also reached out to one of our facilitators, Fiona, who has a background in producing films.

We tossed around a number of ideas including webinars, having speakers come to the convention space early, and even going to the different cities for more personal coaching. The solution that we came up with, though, was to start with a webinar for the whole group. We delivered the webinar live three different times. We had each presenter work with one of our instructors one-on-one via Skype for about an hour. And, we also arrived at the convention hall a day early to work with any of the speakers who needed additional help. It worked perfectly.

5. The Last of the Steps of Storytelling is to End with a Call to Action

My dental hygienist is a great storyteller. She constantly chats away during teeth cleanings. The stories are always really interesting. However, when I leave, it is almost comical. The reason is that I always wonder, what was the point of any of those stories?

You don't want your audience to have a similar question. 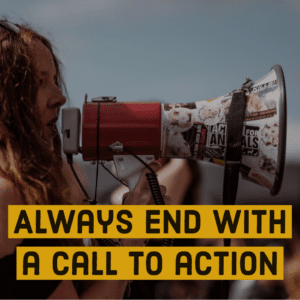 So go ahead and tell them what the point was. By the way we do this naturally. We will often finish a story by saying, "my point is..." or "the reason that I'm telling you this is..." I remember reading Aesop fables when I was a kid. They always ended with "the moral of the story is..." So, don't leave your audience hanging. Leave them with a moral of the story.

The Real Secret of How to Tell a Great Story is to Practice Different Versions.

This final tip isn't really one of the steps of storytelling, but it is an important part of how to tell a story. It is a good idea to practice different versions of your story. I got this from my friend Ton Antion when I interviewed him about building a personal brand. He suggested having a 30-second version, a one-minute version, and two-minute version of every story.

Although I had been teaching students how to tell a great story for years, I never really taught this. I'd just say something like, "If time is short, just condense your story down." After Tom mentioned this tip, though, I began to pay attention to the look on my student's faces when I said this. I'd sometimes see a little confusion. So, we actually started practicing this in class. It has been a big help. In fact, we sometimes find that a well-worded 30-second story can be more impactful than a longer one. Try it yourself and see!

Take the online mini-course now! Get $25 off for a limited time!