How to Stop Using Er, Um, and Other Filler Words in Speeches 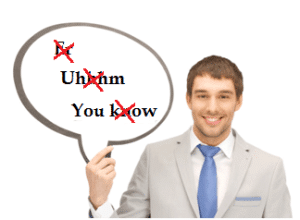 Filler words are a natural part of everyday conversations, and in fact, if they aren't there, you'll actually sound strange (or even fake) to the audience, so you don't want to eliminate the filler words all together. However, that doesn’t mean they have to be a major part of your speeches and presentations either. Overuse of the filler words has the potential to detract from your message, so as you become more and more comfortable speaking in front of a group, it might be a good idea to fine-tune your message by reducing these distractions. The best speakers in the world have trained themselves, over time, to minimize their use of filler words. (Notice that I said minimize, not eliminate.) Excessive use frustrates the audience and makes the speaker less credible. With a bit of practice, though, you can minimize filler words as well.

What Exactly Counts as a Filler Word?

The term ‘Filler word’ is a commonly used for different kinds of additions to a speech or presentation and may include such things as the following:

Keep in mind that if you say or use these terms every once in a while in a speech, that is not a big deal, and in fact, you will sound very natural and "normal". However, if you use the same filler over and over, your audience will likely perceive you as being nervous or not in control. So, do not -- under any circumstances -- try to eliminate filler words all together! The filler words that we use, on occasion, make us normal and relatable.

In 2000, George W. Bush had a series of debates with Al Gore. Gore, the current Vice President at the time, was also a skilled and polished debater. After every debate, the pundits would talk about the performance of each candidate. The news program talking head would say, "So, who won the debate?" The consensus was clear, "Al Gore," "Al Gore," "Oh, hands down, Al Gore." Interestingly, though, when the focus groups asked the question, "Who do you best relate to?" or "Who did you like better?" the non-partisan focus group participants mostly favored George W. Bush. Gore was polished, not a filler word in sight. But Bush seemed more, well, human.

The same thing occurred in the Primaries in 2016. Ted Cruz was the polished no filler word speaker, and Donald Trump was the more spontaneous speaker. Donald Trump received a lot more votes, though.

Before you attempt to make any improvements, you should first know what, and how much, you need to improve in the first place. You can do this in two ways:

You know how some speakers talk so fast one minute and then run out of things to say after that? Those speakers don’t practice information chunking.

Chunking is organizing the ideas of your talk or speech, and then talking about them in distinguished ‘chunks’ or groups, leaving a brief pause in between each chunk. For example, you’re talking about the future of resumes, a possible chunking order would be:

In that example, you’ll talk about current resume formats first then pause before discussing futuristic formats. Doing this minimizes use of filler words because it organizes your talk and gives you a chance to catch a breath, and think of what to say next.

By the way, "Chunking" is the technique that we use when we teach presenters how to design and deliver great speeches. You can find details about this technique in How to Design a Presentation Quickly.

Filler sounds and phrases minimize once you get wrapped up telling a story. People rarely use filler words when telling a story to their friends? The technique also works phenomenally well when delivering business presentations. Because you know the story so well, you don’t have to gather your thoughts or think hard about what to say.

As an added bonus, people love listening to stories! They also make your speech much more memorable.

I often end my two-day Fearless Presentations ® classes by going over a list of the 10 Deadly Sins that Turn Off Audiences. (#9 on the list is using too many filler words.) When I go over the list, I typically ask the class, "How many of these things did we eliminate in the class?" Most often, the answer is, "Well, most if not all of them." The interesting thing about this is that we NEVER cover how to eliminate filler words in the class. Filler words are a symptom of nervousness. We reduce those filler words by reducing nervousness. We reduce the nervousness by making stories and examples a big part of the presentations that the class members design. So, if you find yourself using a lot of filler words, the best way to reduce them is to tell more stories.

Transition phrases or words are different from filler speech. Whereas ‘um’ makes it obvious that you’re not yet sure what to say next, “Let’s move on to…” gives you a chance to gather your wits discreetly. In the Fearless Presentations® public speaking class, we coach participants to have a clear idea of just a few, most important, bullet points (versus have dozens of points and slides), so, as a result, just numbering off the next point is a natural -- and different -- transition. "Point number two is..." or "the next point that we'll be covering is..." will sound very natural, and they are easy ways to transition from one major point to the next without sounding repetitive.

Next time you’re about to say ‘um,’ try to stop yourself immediately. It might feel awkward, but it’ll get easier in the long run as you practice the strategies above. Eventually your awkward pauses and filler words will minimize until you can’t notice them yourself.

Keep in mind that the absolute best way to minimize your filler words is to reduce the public speaking fear or stage fright that you have when you present, and the absolute best way to eliminate the public speaking fear is to get a good coach and practice in a controlled environment. That is why thousands of people, every year, choose to participate in the Fearless Presentations® public speaking class. If you want to reduce those filler words for good, make sure and attend an upcoming class!

If You Need Additional Help, A Good Public Speaking Class Can Do Wonders 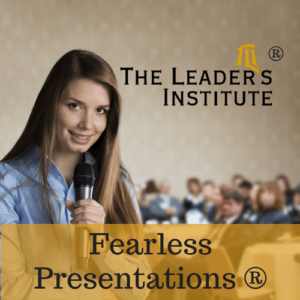 Obviously, we are biased, but the Fearless Presentations ® class can really help people who have nervousness when they present, and as a result, they use a lot of filler words. The link to the class will show you the curriculum as well as a schedule of upcoming classes. Whether you go to our class or not, if you struggle giving presentations, a good class can really help!