Where Does Stage Fright Come From? 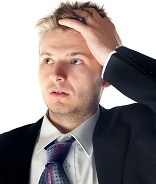 Fear of any kind comes from one or more of three areas. The fright will come from either the threat of a potential failure, a similar past failure, or the perception of a past failure. The more pressure and the more that the person has to lose from the activity, the bigger the threat of failure becomes. Keep in mind that I'm not saying that if you experience nervousness that you are a failure. That is not what I'm saying here. What I'm saying is that if you delivered a presentation in the past and it didn't go as well as you wanted, then chances are, the next time you have the opportunity to give a presentation, you will be even more nervous than the first time. If you did well in your last speech, but this time, you presentation can help you close a million dollar contract, then you will likely be more nervous this time, because more is on the line. The point is that the higher the risk of failure is, the more nervous the speaker will be.

A Good Public Speaking Class can Lower this Risk

The More Imminent the Threat, the Greater the Fear

In a good public speaking class, like Fearless Presentations®, the coach can help each participant have a series of successes in front of a group just like a sports coach (http://learntocoachbasketball.com/a-coachs-impact-on-the-fear-of-failure). Our coaches give participants and easy format that guarantees success, and since each participant sees people around him/her improving and having successes, it is much easier for the participant to grow as well, because he/she is receiving the benefit of the instructor coaching the other participants as well. This process can shorten the learning curve exponentially, because when the participant has just a single really good speech, the risk giving the next speech is lowered. After going through this process a number of times in just two days and seeing how the other participants in class have grown as well, participants can walk out of the class realizing that they are more prepared for their next presentation than most presenters will ever be. Self-confidence shoots through the roof!

What about Coaching and Clubs

One-on-one coaching can be very valuable if the presenter has a big presentation coming up that he/she needs help with, because a good coach can help the person design, deliver, and refine the presentation dramatically in a very short period of time. In fact, many graduates of Fearless Presentations® come back and have an instructor do one-on-one coaching with them. What is missing, though, is the growth from seeing other coached that I spoke about above as well as actual practice in front of a group. Yes, the risk will be lowered significantly after one-on-one coaching, but just before the presenter speaks, he/she will feel a great deal of nervousness because he/she will be experiencing a part of the presentation that isn't as familiar. In a class, though, the presenter will have experienced that nervousness a few times, so the nervousness will diminish with each success. Toasting clubs can also be helpful, because they offer the series of successes in front of a group like a class. However, the amount of time that the growth takes to occur is significant. Whereas, in a class where each participants presents six to eight times in two days, the success come one after the other in a short period of time. In a club, the success may come once every two to three months, so it can take years to experience the same growth that occurs in two days in a class.

So, if you really want to reduce your stage fright, sign up for a good public speaking class right away and eliminate that fear! To register for an upcoming class, go to https://www.fearlesspresentations.com/seminar-schedule.