You Are the Undisputed Expert, So Now Prove It 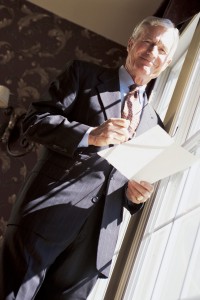 Regardless of what industry that you are in or what expertise that you have, you first have to realize that you are the expert at something, and the knowledge that you have is valuable to someone. When I was 14 years old, my dad owned a home remodeling company, and every winter, I crawled under houses helping him repair frozen pipes that had burst. After a couple of winters, I had so much experience doing this, that I could do it in my sleep. So as a teenager, I was an expert at repairing ruptured PVC pipes. After I graduated college, my first real job was working for an oil company doing title work for mineral rights. After a couple of years, I had not only gotten pretty good at it, but I had also trained a number of new people. My third year in the training industry, I generated a half-million dollars worth of sales for the first time, and that same year, I also received a couple of awards for outstanding instruction. It took me five years as an entrepreneur to attain my first million dollars, but it only took about eight more months to generate my second million. With each of these accomplishments, I became the expert, because I had information that the general public didn’t have (even when my expertise was repairing frozen pipes).

Don’t under estimate your knowledge. Your experience has made you the expert.

One of my friends in college was going to school to be an elementary school teacher, and she absolutely hated math. However, once she graduated, she found out that in the State of Texas, Math and Science teaches got paid an extra fee, because teachers with this expertise were in high demand. So, she decided to be a fourth grade math teacher. Those of us who knew her pretty well were laughing when we asked her about her career choice, because for the three or four years that we had known her, she complained over and over about the math, algebra, and trigonometry classes that she had to take in school. These classes were her nemesis. After a little teasing from us, she replied by saying, “In order to teach fourth grade math, I just have to be an expert at fifth grade math,” and one of those prophetic life lessons for me was learned. In order to be an expert at something, you just need to have a little more knowledge than your audience.

For instance, let’s say that you are a restaurant manager who turned around a struggling location. How many other managers are there in the world who would want to hear how you did it? You’d be the expert at restaurant turnarounds (especially if you were able to do it a second or third time). Or, if you are a dentist who is really good at getting your patients to show up for every sixth month check-up, then other dentists would pay dearly to figure out how you do it. Whatever you do on a day-to-day basis makes you the expert at that activity.

Because you are the expert, you have credibility in the marketplace.

I had been teaching presentation skills classes for about ten years, and I ended up getting a contract to teach presentation skills and leadership for members of the Associated General Contractors. After teaching classes for these member companies for a couple of years, the participants began to think of me as being an expert in the commercial construction industry. Keep in mind that I had never once built a big skyscraper. In fact, I knew very little about the day to day operations of general contractors. However, because I had worked with so many general contractors in that first couple of years, I had more expertise in the industry than other leadership and presentation coaches. I had developed a specialty.

A friend of mine decided that every sales trainer targets car dealerships as potential customers, so instead, he decided to specialize in conducting sales training for salespeople who sell trailer houses. Since he had very little competition in this industry, he quickly became the go-to expert.

One of my clients hired me to coach a few of his employees who were preparing for what he called a “short list” presentation, which was a presentation where a “short list” of qualified vendors were competing for a really big contract. Although everyone in the room knew more about building skyscrapers than I did, I knew way more about designing and delivering presentations than any of them did. So, with my coaching, they were able to borrow my expertise to deliver their presentation in a much more fluid and effective way.

After doing this kind of training a few times with some pretty remarkable success, I quickly became known as the “short list” presentation coach, and I had developed a brand new expertise.

Ask yourself, “What am I really, really good at?” and you will quickly find out what your expertise is. Once you realize that you are the expert, the rest is relatively easy…