Everything You’ve Learned about Public Speaking is WRONG! 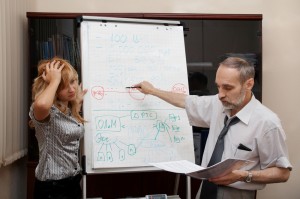 Many myths about public speaking have been passed along from person to person over the years, and the one thing that is consistent about these myths is that the people who pass them along are still nervous about speaking. After facilitating over 200 public speaking classes and never having a single person fail to significantly reduce his/her fear of speaking, I had a dramatic realization. Just about everything I was taught about public speaking while I was in school and from well meaning peers and coworkers - WAS WRONG!

Below are the top three myths that we have identified, and some simple tips that will help you reduce your fear or nervousness.

Myth #1: If you write out a talk and memorize it, you'll be more comfortable.

This is the fastest, easiest way to make your presentation boring and canned and to make you more nervous. When you memorize a talk word-for-word, any slight hick-up or distraction can throw you off track. That can increase your nervousness. Instead, write out just a few key points and practice giving stories or examples to back up each point.

Most of us believe that a little is good, more is better, and a whole bunch is just right in public speaking. If I can give you 10 reasons why my topic is true, then that is obviously better than two or three reasons, right? Well in public speaking, the more points we offer, the more confused our audience can become. A good rule of thumb is five or less. So, after you decide on your topic, narrow down the key points that support your topic to around five key points or fewer. If your talk requires more than five points, then it would be best to divide the presentation into two different talks.

Most people think that "Uhms," talking fast, and nervous gestures are bad, but in fact, these things can make you very relatable to your audience. "Uhm" is a normal word in the English language. We say this word all the time in normal conversation. When it's not there, the speaker can sound phony and forced. Plus, I've found that if you try to get yourself to stop saying "Uhm," you'll probably just start saying it more often anyway. Also, when people speak fast and move more, they show energy and enthusiasm. I've had many speakers come through my classes who were scared to get up and speak at the beginning of the program, but when they did speak, the audience thought that they were excellent speakers. The audience saw the nervousness and assumed it was enthusiasm.

Realize that speaking well is like learning to play golf. If you get a group of hackers together to coach each other, you're just going to get a group of people very proficient at a bad golf swing. However, if you get a good coach, he can shave strokes off in no time. If you really want to get good at public speaking quickly, get a good coach who doesn't buy-in to all the speaking myths.

Doug Staneart is a senior instructor for The Leader's Institute. He has twenty-five years experience training and coaching. He has built and sold two successful businesses. To learn more about becoming a High Impact Leader visit our website at http://www.fearlessandpersuasivespeaking.com or call Doug toll-free at 1-800-872-7830.